The beautiful old school building has been transformed into an art and cultural center, open every day.

Two 125-yr-old trees in the center of the village give it a lovely atmosphere.

Although not a Kinmen National Park village, Bishan has lots of traditional architecture, including two splendid western-style buildings.

Bishan Village, about a 15-min bicycle ride from Shamei town, was first settled about 700 years ago.

There are quite a few traditional houses, good examples of the typical Kinmen one-hall-four-room residence. House number 6 is a registered historic house.

Besides houses, there are also temples and ancestral shrines to see. And you'll no doubt spot the playful murals. They're the result of a 2002 village revitalization project led by a picture book artist named Wawa. 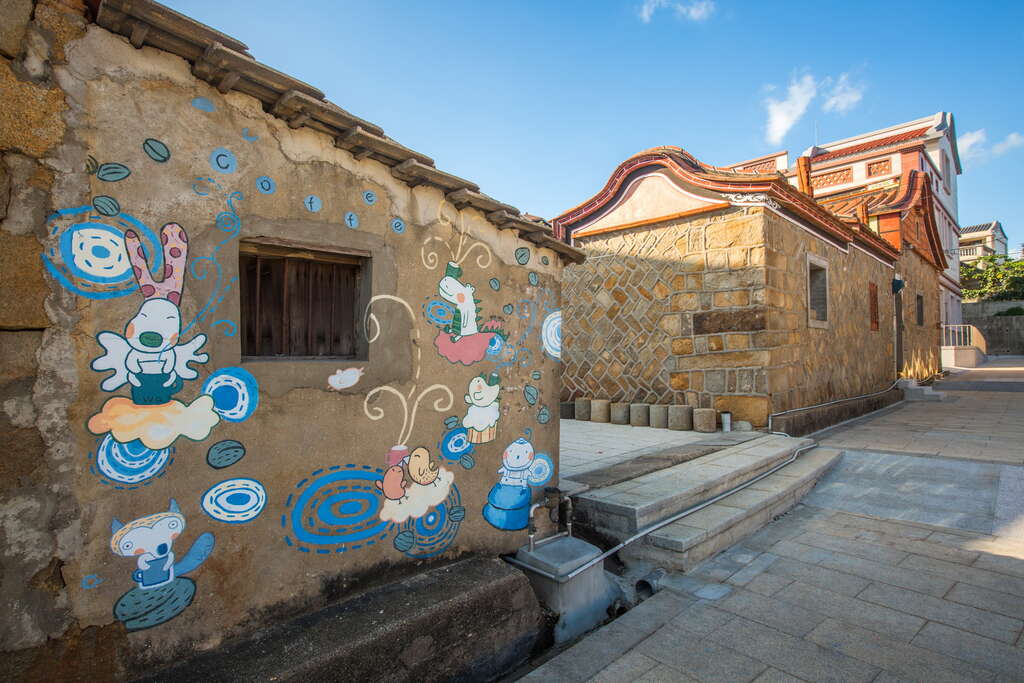 Rui Yu School
What a glorious testimony to the value placed on education this building is! It's named after the man who funded it. Chen Rui-Yu was a Kinmenese expatriate who dedicated his life to his career in Singapore. After he died, his son commissioned fellow Bishan villager Chen De-Xing to build an academy, offering children in the village a free education. As it turned out, the school operated for only one year, as classes had to be suspended when the Japanese invaded Kinmen. Later, Rui Yu School was listed as a county monument and was restored. Today, it serves as a community art and cultural center. Though time has done damage to the Baroque-style architecture, you can still get a sense of Chen Rui-Yu's vision for the local children through the fine clay sculptures of Indian policemen, flowers, cranes, etc. 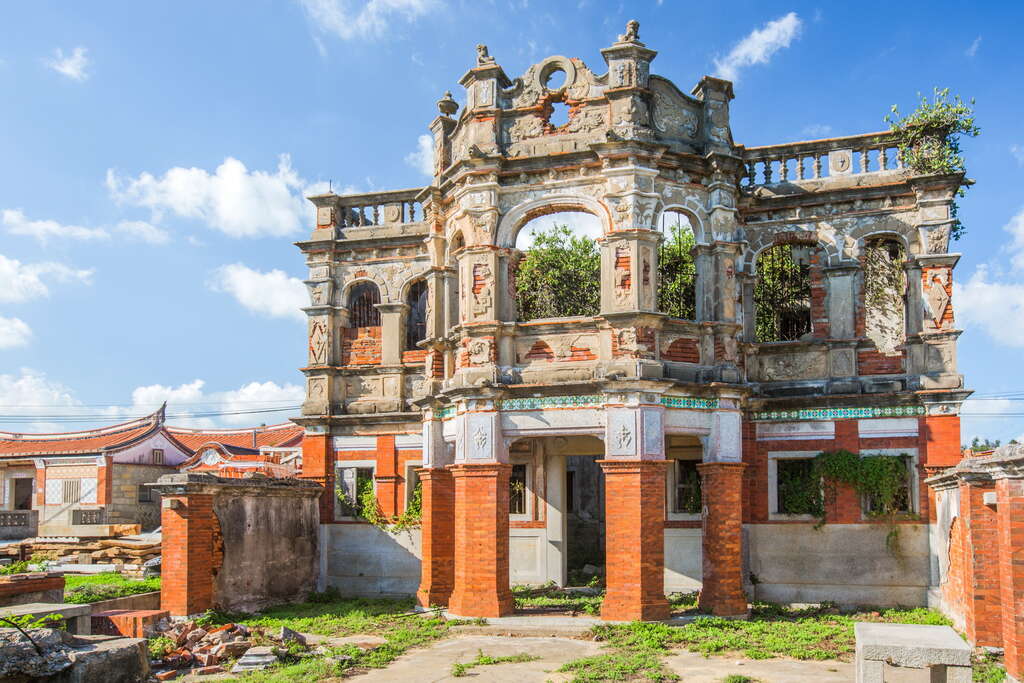 Chen Qing-Ji Western-style House
The Chen Qing-Jin western-style house was built in 1931. Above the door, there's an engraving in English, "Union is Strength", presenting a good example of the fusion of East and West in Kinmen architectural styles, popular at that time. The house also features fine architectural details that comply with feng shui principles. Look for the carvings of simple petal design, and clay sculptures of sailors on dinghies and Indian soldiers with guns. From 1949 to 1980, the house had real soldiers inside it, as it was used for military training during that time. In 2014, several scenes from the Taiwanese movie "Paradise in Service" were shot here. 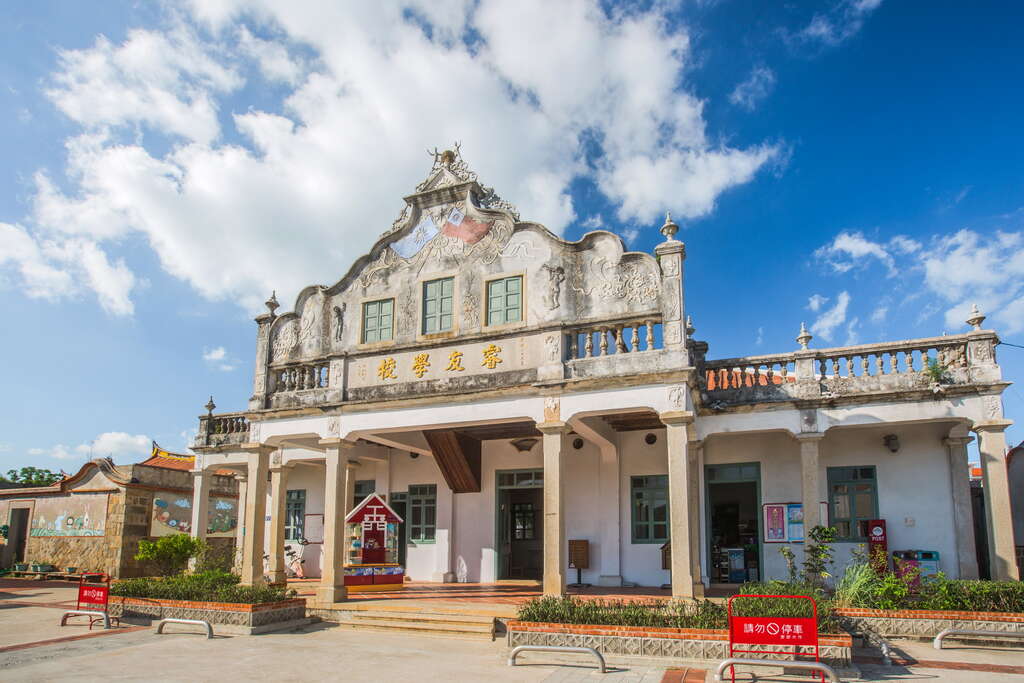 Chen De-Xing Western-style House
Located at the entrance of Bishan Village, Chen De-Xing western-style house was one of the earliest western-style houses built in Kinmen. The facade features carvings of mice, goldfish and plantains, all symbols of abundant offspring. Also, the word plantain in the Taiwanese dialect sounds like the word which means "bringing in something", thus further signifying the wish for children and wealth. Although the house has seen better days, we can still appreciate its impressive architectural details. 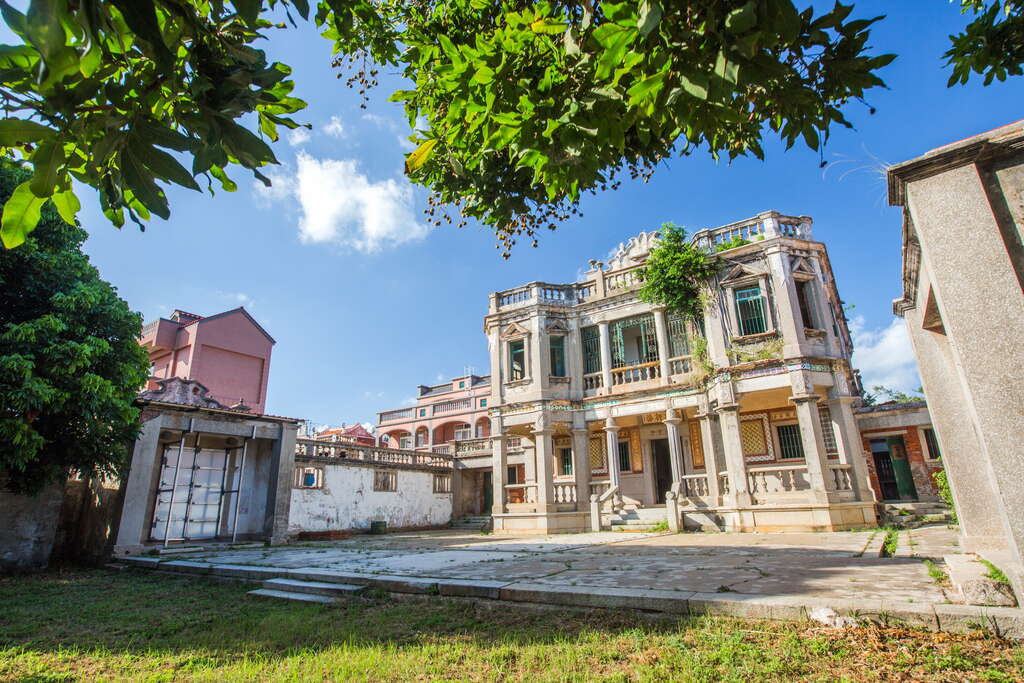